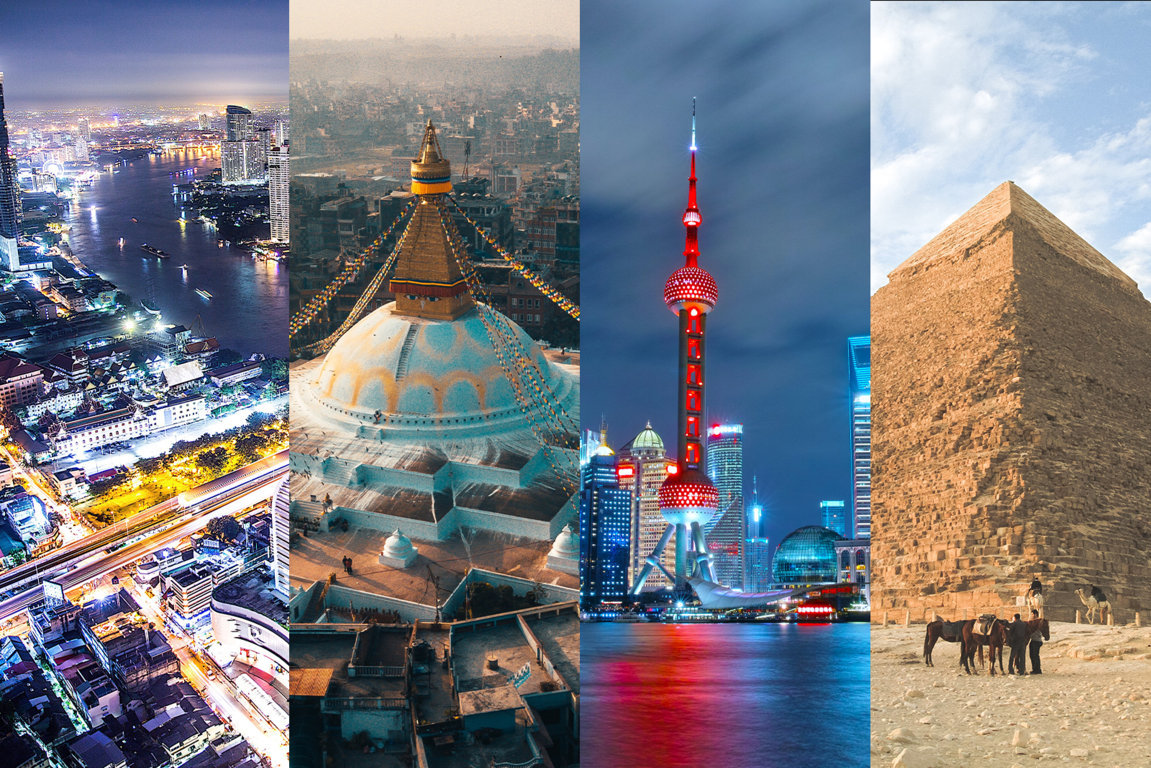 With the beginning of the new year, everyone is eager to shake off the blues of the pandemic-ridden 2020. And what better way to see off a year spent cooped up at home than to travel abroad?! That’s why we come up with the 4 best places you should travel to in 2022.

Once a relatively unknown tourist destination, today Thailand is one of the top tourist countries in the world, with Bangkok being regularly ranked as the top most-visited city in the world. So what draws people from all walks of life to the Land of Smiles? For many first-time visitors, it’s the famous beaches of southern Thailand and the frenetic but always capital Bangkok that initially lures them. But they soon learn there’s a lot more to this always-changing country than the postcard images.

The south of Thailand truly is an island paradise, with something for everyone – from the very popular Phuket and Ko Samui to lesser-known islands like Ko Adang and Koh Chang. Here the pristine waters are interrupted only by magnificent boulders erupting out of the water, natural skyscrapers in an otherwise unmarked landscape.

To the north of the country, those memories of the beach fade as you enter the jungles around Chiang Mai. Discover more about the indigenous peoples who call the mountains home and eat some of the best food in the country.

Of course, you can’t forget Bangkok, the City of Angels. This metropolis has inspired millions from the likes of Joseph Conrad to James Michener, and it will inspire you too. From the labyrinthine night markets, the vibrancy of temples and palaces to relaxing, luxury accommodations, Bangkok appeals to nearly every type of visitor.

Exciting experiences in Thailand include:

Whether you choose to climb to basecamps high into the Himalaya Mountains, relax on a safari in search of tigers and rhinos, or indulge in the global culinary choices found in Kathmandu, visitors will be impressed with the variety of activities within Nepal.

Nepali may be the first language of the country, but visitors are always amazed by the ease of traveling within Nepal as many languages are widely spoken in tourist areas. From the sherpas in the mountains to the farmers in the jungle lowlands, the Nepalese are a hardworking country. However, the friendly attitudes keep Nepal high on the list of travelers’ favorite destinations.

Nestled between India and China, Nepal has prospered with trade and travelers for centuries. Just as the ancient civilizations did before, most travel begins with Kathmandu before stretching out into either the jungles or mountain ranges.

Even on the rugged alpine trails near Mount Everest or in the riverside eco-lodges of the Indian plains, visitors can expect comfortable accommodation in the remotest of villages. International cuisine is easy to find, as well as local daal soup in most cafes and teahouses. Visitors will need time if they want to explore all of Nepal but will be happy knowing getting from one place to another using the bus or internal flight network is easy, if not always on time.

China is one of the biggest and most mysterious countries in the world. A 5,000-year-old civilization rich in culture and history, responsible for the invention of everything from gunpowder to pasta. It is nearly impossible, to sum up, such an expansive and diverse country in a handful of paragraphs. China is home to 1.3 billion people, including 56 ethnic groups and countless cultures, culinary traditions, and customs.

Many shy away from visiting China due to its political and cultural differences, as well as the steep language barrier. While it’s true that few people outside of the tourism industry speak English, tourists are generally welcomed and met with a friendly curiosity.

Outside of major cities, foreign visitors are treated as something of an oddity and can expect to be pressed with many questions and requests for pictures.

A visit to China is well worth any perceived hassle. Where else in the world can you observe incredibly ancient history and tradition thriving side by side with enormous modern cities. A country that is growing and changing so fast needs to be seen to be understood.

Some of the many unique activities found only in China include:

As one of the most iconic countries in the world, Egypt has intrigued travelers for thousands of years, all the way back since the Old Kingdom. From the settlements in Ancient Egypt to the recent revolution, Egypt has always been a node of important events that have shaped and changed the course of history, both national and international.

The Land of the Pharaohs, as it is often known, is a living museum that keeps evolving and uncovering secrets from its rich past. Pharaohs like Tutankhamun, Ramesses II, Akhenaton, and even his wife Nefertiti, tell a vivid picture of a glorious time in Egypt through their monumental legacy, treasures, and written history.

But Egypt is not all about ancient times; history is still being made, most recently with the Arab Spring that shook the country to its core and is still yet to be fully defined where would it lead.

It is easy to travel to Egypt, as most sights are located near popular modern-day cities like Cairo, Luxor, and Aswan. Still, Egypt can bring a high sense of cultural shock through the interaction with locals, the bustling markets, the desert environment, and even the food.

Egypt also offers a more laidback side with its modern holiday coastal resorts in Sharm El-Sheik and the picturesque Elephantine Island, to name a few.

If you want to go deep into Egypt’s history and culture, here are some things you should not miss: